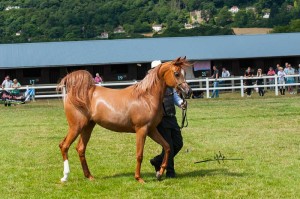 The colt “Design For Life” could win the Gold Junior Male Champion, whereas “Warsong” won the Gold Yearling colt Champion and “Shahbandar”, a full brother to International Champion Stivalery, champion of Gulf  and European tournaments, won the British production horses gold. “Al Muawd” completed the achievements of his superiority and domination by deservedly wining Gold Junior Female Champion and Silver Junior Female Champion  through “Mahbuba” and “Evangeleen”  respectively, who both caught the attention of the referees, and deserved the audience applause. Al Muawd Stud also competed in Yearling Colt Contenders and all titles went to Saudi studs: “Ryaanh” was crowned with gold, “Shaden Inaya” with silver, and “Cinderellaa Al Muawd” with bronze.

The manager of Al Muawd Stud; Saad Al-Subaie expressed his deep pleasures with this achievement saying: “This is not surprising  as Al Muawd Stud  achieved victories in Saudi Arabia, the Gulf and Europe. I dedicate this victory in the month of triumphs to the first horse sponsor; The Custodian of the Two Holy Mosques and the Crown Prince, and to the dear homeland. This support has distinguished the equestrian sport and given it momentum and great reputation at global level. As a result, this sport has earned several significant achievements in various events.

We are gratified to see that Al Muawd Stud has become one of the most important studs in horse breeding- an achievement we take so much pride in.”